This beautiful reserve is a unique flooded rainforest covering 603.380 hectares around Cuyabeno river in our northeastern Ecuador. Seasonally inundated, the flooded forest provides a home to diverse aquatic species and bird life. The blackwater rivers, rich in tannins from descomposing foliage, form a maze of waterways wich feed the 14 lagoons. These numerous lakes and swamps are home to fascinating species, such as freshwater dolphins, manatees, caimans and anacondas.

The reserve was created in 1979 for conserving its wildlife and providing a sanctuary in which the indigenous inhabitants of the area (Siona, Secoya, Cofan, Kichwa and Shuar) could lead their customary way of life. Now, these groups are supported by Ecuadorian and International nongovernmental organizations (NGO´s), tourists, travel agencies like us and conservation groups to provide a very well protection to its magical territory.

Why Cuyabeno is a magical place?

Cuyabeno is a magical reserve because is home of the most important lake sistems of all Ecuador, as well reconized like Wetlands of international importance and IBA´s (Birds and Biodiversity Areas). Its extraordinary flora is formed by palms and ceiba trees, guayusa, lianas, heliconies, bromelias, matapalos (ficus trees), etc. There are also more than 500 types of birds: like macaws, toucans, eagles, hawks, etc; more than 400 kinds of fish: like pirañas, aiguilles, catfish, etc; 96 types of amphibious and reptiles; and mammals like capybaras, armadillos, giant river ottters, monkeys, jaguars and maybe the most important, our pink river dolphin, with no doub, Cuyabeno is the best place to enjoy a close contact with them. 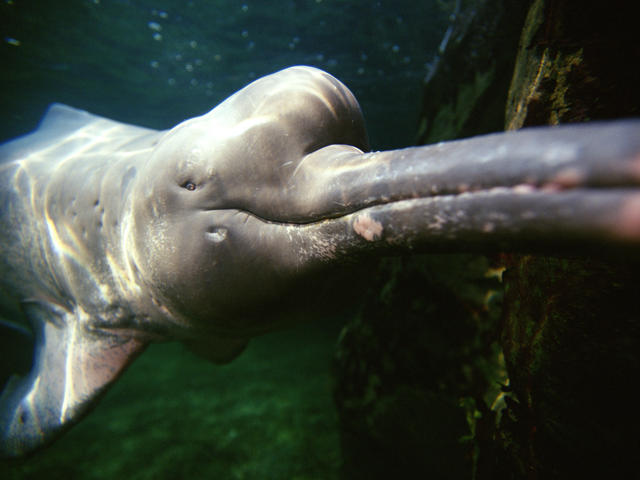 The Amazon pink river dolphin is the largest and smartest out of the five freshwater species. A full-grown dolphin can grow up to 9 feet (2.7 meters) long, weight up to 400 pounds (181 kg), and live to 30 years old. They also have unusually large brains, with 40% more brain capacity than humans.

Although Amazon pink river dolphins are famous for its pink hue, they weren’t born this way. The dolphins are actually born gray and slowly turn pink as they age. Their final color can be influenced by their behavior, capillary placement, diet, and exposure to sunlight. The dolphins can be anywhere from mostly gray with some pink spots, to almost flamingo pink. And when the dolphins get excited, they can flush a brighter pink, similar to humans.

Although dolphins have a reputation for gathering in groups, the pink river dolphin is often seen alone or in small groups of 2-4 individuals. In some food-rich areas or at the mouths of the rivers, such as at the Cuyabeno Reserve, specially in Lagartocha river, in the extreme north, where the highest abundance data have been recorded in the entire Ecuadorian Amazon, estimated at approximately six dolphins for every ten kilometers of river traveled.

The good news: Despite living in small groups, Amazon pink river dolphins are incredibly curious and outgoing animals towards humans, and frequently interact with our guests in our Cuyabeno experience!

You don't have permission to register